9 Addictive Roblox Games to Keep You Entertained Throughout Lockdown 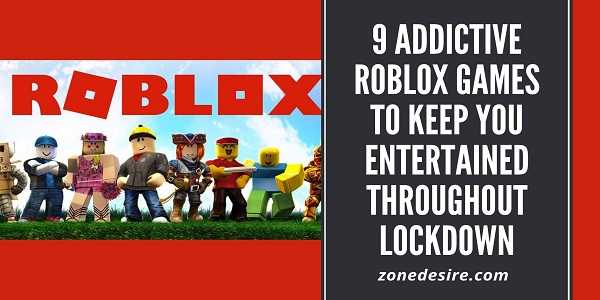 64 million active users every month, 178 million online profiles, and over 40 million games; Roblox is one of the best platforms for 3-D online gaming. Over the years, since their launch in 2007, they have introduced several different types of games and endless features. The initial idea was to launch a website for computer gaming. Still, Roblox now works efficiently on mobile devices (Android and iOS), tablets, and even Xbox. You can easily interact with other gamers and also create your virtual online profile. With so many games, it is hard to pick one – the website is so interactive that you really cannot pick a personal favorite – unless you play them all! As Roblox fans, we have shortlisted some of the best games over the years that will not disappoint you in any way. Let’s discuss them in detail:

Adopt Me! is one of the most popular and most played games on Roblox. The game revolves around caregiving, and the players can take the role of either an adopted child or the adoptive parent. It’s kind of like Sims but on Roblox. The game has been around for over 4 years now, and collectible pets are the star of the show.

There are weekly events along with some guest introductions every week, along with updates. Since the audience of Adopt Me! is fairly younger, the game has micro transactions, especially for the pets and collectible features.

Alexnewtron developed this game in 2016, and since then, this has been the first Roblox game to cross 1 billion visitors! Now that’s an achievement. You can play this game with millions of other MeepCity players by adding, chatting, and playing alongside them. The quest is to build a customized estate of your choice. The developer himself is still a player because he wants to give his players a worthy experience. Next time you are playing MeepCity, who knows your favorite player is Alex himself. Have you ever wondered why Dollywood is so entertaining, and you can never have enough of it? MeepCity is a virtual reality exceeding expectations and entertaining billions who want to have their very own world of entertainment.

Roblox classifies Jailbreak as a Town & City game. However, at this moment, it’s more of a family-friendly version of Grand Theft Auto Online. In a game that includes driving, robberies (for thieves) or raids (for policemen), and luxurious homes to adorn with all that stolen stuff, players can choose to side with the police or the thieves. Jailbreak’s extraordinary success has resulted in real-world retail contracts for its authors who currently utilize the game’s revenues to put themselves through college. How cool is that? If you’re looking for a game that is preferably a lite version for GTA, Jailbreak is your go-to game.

Royale High is a game for those who love the old high school charm. If you love dressing up and showing off – basically, if you are a little diva, this game is your home! Thousands of online players every day can help you feel fashionable every day. Camelhbob, the developer of this game, has been a little dive her whole life as well. She wanted to create a virtual environment for those who love to dress up and play. The future plans include allowing the Royale High players to create their own shops and make their own game currency with several other features. Dedicated fans will just have to wait for this!

You can find Murder Mystery 2 under the horror genre. This game requires multiple players for each round. Every round, a player is termed as the murderer and the other as the cop, while ten additional players are innocent. Every person has different tasks during the game until one of them reaches their objective. The murderer is supposed to kill all the innocents without getting caught, the policeman is required to catch the murderer, and the innocent people just have to hide and survive without getting caught. This game kind of gives an Among Us vibe – a game that recently went viral. Fortunately, it hasn’t been able to take over the charm of Murder Mystery 2.

Work at A Pizza Place

Working at a pizza place seems like a tough job. Well, not if you are playing this roleplaying game. Launched in 2008, it is among the oldest, but most played Roblox games of all time. You will be required to run your very own pizza shop where regular orders come. The money earned can be spent on upgrading your shop. You can hire many people and improve the outlook with several aesthetic additions. The idea behind the game was to recreate an assembly line. You can also socialize with friends and other people who visit your store and work towards the common goal of building the best online pizza shop in town.

Piggy is a serialized horror game with a lovey, children’s television-inspired layout, effective survival mechanics, an apocalyptic background. Now, this may not be what comes to your mind when you hear the word “Piggy,” but what can we do about it? The concept of the game is pretty deep, and the players progress to unravel the ongoing mystery. The main storyline is already over, but a second season named “Book 2” is in the works.

There’s additional good news for people who have over five friends. You can set up your very own private series and enjoy Piggy with the people who share the same enthusiasm as you.

If you like a simulation genre game, Bloxburg is among the best of them all. The game consists of some of the best features for a simulation. Your character has a job, a social circle, and, of course – plenty of entertainment options. Bloxburg is among the very few Roblox games that require a payment. It costs 25 Robux, which is around 30p (albeit the current minimum purchase of 400 Robux is around $8). A few add-ons available for purchase, which mostly bring more diverse and versatile construction tools. Next time when your family is too busy Googling amusement parks near me, you can give them a solid pass and spend your day growing the character.

Anime Fighting Simulator is, as the name suggests, a Fighting game inspired by the bizarre battle seen in numerous anime. Because it’s a Roblox game, it’s naturally less visual than some of the top-class fighting series, but if you enjoy the genre, it’s remarkably complete in terms of content and features.

New goods, weapons, and other features are added regularly, and the game even has seasons. Fans know we are on season 4 currently. There are many game modes to round out the experience, including the recently introduced Tournament mode and the traditional inclusion of a Story Mode that not a lot of people play. You can also set up a private server for around $4.80.

Roblox is one of the best online platforms to play games. We have picked some of the best games for you that come with amazing features and addictive content to keep the users hooked. Many developers still play these games to stay in touch with requirements and keep the audience entertained.