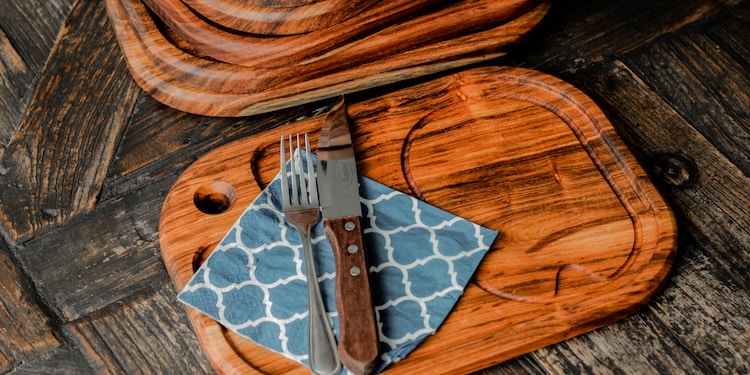 Photo by Nadia Storm on Unsplash

A beginners guide to the humble steak knife

Can you name a more iconic piece of cutlery than a steak knife? We can wait…

The stainless steel steak knife was first used in America in the 1950s. Stainless steel was first developed during World War 1 and it became more widely used by the end of World War 2. It was at this time when the first steak knives began to be used.

In this article, we are going to talk you through everything you need to know about steak silverware and how to look after these pieces.

What we now recognize as a steak knife – like this laguiole carving knife set – was first invented in America in the late 1950s.

As post World War 2 rationing was ending in the country meat was becoming more readily available. Steakhouses were becoming more popular and restaurant owners were starting to notice a need for a more appropriate set of steak cutlery.

At this time all knives that customers were given in restaurants were kept sharp enough to cut steak and the majority of them were made out of materials that needed to be polished after every wash.

Due to the lack of working age men after World War 2, restaurants did not have enough staff to sharpen and polish all these knives. So it was decided that sharp knives would only be given out for meat dishes and that they would start making cutlery out of stainless steel.

Traditional steak knives are made with stainless steel blades and wooden handles, although plastic handles have grown more popular in recent years. The handle has indentations to give the user better grip when they are cutting through the meat.

Steak knives have a serrated edge that are said to be designed to mimic the shape of carnivorous animals’ teeth.

Steak Forks have a similar origin story to steak knives.

Forks traveled over to America with the European Settlers. However, forks were more widely used across the world than knives were.

Some of the original meat forks only had two prongs, but as time has gone on traditional steak forks now have an average of 4 prongs. Although this can change from restaurant to restaurant.

One of the most important parts of steak knife maintenance is keeping the blade sharp. This can be done using a whetstone or a ceramic sharpening rod.

Whetstones are tools designed to sharpen the blade of a knife, razon, set of scissors, or other sharp metal implements.

There is no one type of stone or mineral that whetstones are made out of. Many different materials have been used to do the job throughout history. Most commonly stones like Quartz have been used. However, it is now possible to get artificial whetstones to sharpen your blades.

You should use this if you like to use non-serrated, non-traditional blades to cut steak.

These types of sharpening tools are best for knives with serrated edges.

Ceramic sharpening rods may feel fairly smooth to the touch, but they make very fine abrasions on the surface of the knife. These are so fine that they can sharpen the different edges of the serrated knife without any of the thinner pieces snapping off. That could happen if you use a serrated knife on a whetstone.

How to sharpen a steak knife

The best angle to sharpen a knife at is a 22.5-degree angle.

You will want to place your ceramic sharpening rod into a holding handle and make sure it is securely attached.

Then you will want to run one side of the knife along the rod. If you are holding the knife in your right hand then you want to push the blade up and away from your left shoulder.

Repeat this 3-5 times until that side of the knife reaches the desired sharpness.

Then turn the knife so that you can sharpen the second side by repeating the whole process.